Close Encounters of the Police kind

I have been a volunteer traffic police officer for almost 6 months now. I usually do my shifts on Thursday evening, roaming the streets of southern Tel-Aviv and Jaffa. I ride in a police car with a regular traffic officer, and together we try to bring some order to the chaotic traffic scene of southern Tel-Aviv. I have been involved in stopping and occasionally ticketing dozens of drivers so far, from all walks of life. Depending on your point of view, these “close encounters” can be either entertaining, or a sad view of society. 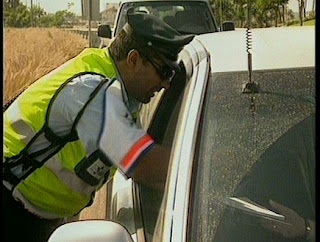 I can’t help but compare the experience of police encounters in Israel to those in the US. I never volunteered with the police in the US, but I did have <few> encounters with the California Highway Patrol, as did some of my family members and friends.

Here’s one: I was driving one evening down the road in Palo Alto, looking for a particular street sign.  I wasn't driving fast and was actually well below the speed limit. I came across a red traffic light, slowed down and prepared to stop. It was rather dark and I noticed something funny about that traffic light – there were actually two of them - about 10 meters apart. I wasn't sure whether I should stop next to the first light, or proceed to the second one. For whatever reason, I decided to slowly roll through the first light and came to a full stop next to the second one. Just as I came to a full stop, I saw a set of red-blue lights flashing behind me – a police car. As the light turned green, I pulled over to the side of the road and waited for the police car to pull behind me.

I knew the drill: stay in the car, keep both hands on the steering wheel where the officer can see them. Don’t make a move, or begin to talk until the officer approaches you. The officer pointed his floodlight at my car license plate, and after a few minutes came out of the police car and signaled for me to lower the passenger side window.

“Why didn't you stop at the red light?” he asked. “I was confused by the fact there were two red lights next to each other" I answered. "I thought I am supposed to stop at the second one” I tried to provide an excuse. “Well, there is a side road here leading to a school” he said while pointing towards a school entrance. I must have missed that in the dark. “I am sorry, I didn't see that. I am usually not in the habit of running red lights” I said.

The officer stared at me for a few seconds. “Indeed I saw you slowed down, so I will let you go this time” he said. “But remember that running red lights can be very dangerous!” he added. “Thank you officer,” I said, “I will definitely be more careful. Have a good evening!”

I pulled away with a big sigh of relief. It was a close encounter. You don’t mess with a US traffic police officer. Now how would a similar encounter look in Israel? After going through dozens of similar ones, I have a pretty good idea…

Say an Israeli driver fails to stop at a red light. The police officer who spotted the offense turns on the siren in the car, and using the built-in megaphone yells: “Hey you in the Blue Mazda – pull over!” In most cases the driver does stop, usually in the middle of the lane, blocking the traffic behind. Some wait till the traffic officer approaches, but many drivers simply jump out of their car ready to argue their innocence. The dialog that ensues typically looks as follows:

Officer: “Why didn’t you stop at the red light?”
Driver:  “What red light? Oh that one? I did stop!”
Officer:  “No you didn’t. I saw you driving right through it!”
Driver:  “I swear to you I stopped. I always do!”
Officer:  “Do you have any traffic violations on record?”
Driver:  “No my brother. I am a very careful driver!”
Officer (after checking the records): “Our computer shows you got 6 tickets in the past 3 years?”
Driver:  “This is impossible! It must be a computer error! I am telling you I am a safe driver!”
Officer: “I am sorry, but I have to write you a ticket!”
Driver:  “But why? Why can’t you just have some mercy? I have a family I need to feed…”
Officer: “Sorry, but running red lights is a serious traffic offence.  And it’s very dangerous.”
Driver: “Don’t you have better things to do other than extorting money from poor citizens?”
<Officer busy writing the ticket…>
Driver:  “That’s why you policeman have such bad reputation! Why don’t you go chase real criminals?”
<Officer still busy writing the ticket…>
Driver: “My brother-in-law is friends with the city mayor’s assistant. Your superior officers will hear about how you harass innocent drivers! I will make sure you lose your job!!! Do you hear me??”
Officer (hands out the ticket): “Here you go. Please sign here to acknowledge you received the ticket.”
Driver: “I will drag you to court! My lawyer will make sure you regret you ever messed with me…”
Officer: “Drive safely”

OK, I may have exaggerated a bit with the politeness and restrain of the Israeli traffic officer - but not by much. I will say that I hardly exaggerate about the combative behavior of 99% of the drivers we stop on traffic violations. And believe me, I get to see them commit these traffic violations firsthand.

Israeli drivers seem to have little respect to traffic signs, and hardly any respect to other drivers who use the same road. And there is certainly no respect for police officers who try to do their job and make the roads safer for everyone. If we manage to turn that around, and create more respect for the rules of the roads and the people responsible for enforcing them, then driving in Israel will not just become safer, it may even become a pleasure…