I consider myself reasonably well educated, with elementary school, high school, under-graduate school, and grad school under my belt.  I do read quite a bit – books, newspapers, magazines, websites and blogs.  But I have never opened a Talmud book.  That is until yesterday…
Over the past few years, I took classes in ancient Greece philosophy (Socrates, Plato, Aristotle), 17th-18th European philosophers (Descartes, Spinoza, etc.), and Moral philosophy/Ethics (Mill, Kant, Locke, Nietzsche, etc.).  After getting a pretty good overview of Western philosophy, I figured I should take a look at Jewish philosophy – particularly Maimonides (רמב"ם). 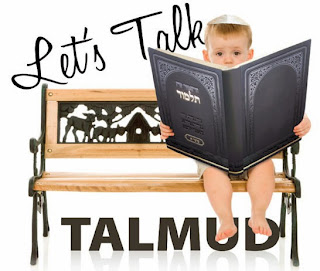 I looked up a class on Maimonides, and realized it requires first taking a class titled “Intro to Oral Torah” (מבוא לתושב"ע). Last time I came across the term ‘Oral Torah’ was at elementary school, and even then we barely touched the subject at class.  Since I didn’t know much about ‘Oral Torah’, I figured I should take the required class before diving any further into Maimonides views.
The class started a few weeks ago, and I must confess it has been quite confusing. Terms like ‘Mishnah’ (משנה), ‘Gemara’ (גמרא), ‘Talmud’ (תלמוד), ‘Midrash’ (מדרש), Aggadah (אגדה) and ‘Rabbinical Literature’ (ספרות חז"ל) were thrown into the air by the teacher. I heard most of these terms before, but wasn’t quite sure how they relate to each other. I was missing the “big picture”.
Fortunately the class has homework assignments… To complete those,  I had to read through the course material. I started asking the teacher questions, and search through the Internet - Wikipedia came to my aid as usual...  Slowly the pieces started falling into place. I felt ready to “take the plunge”.
Yesterday, I decided to walk into the local library and look at some books. I walked in and hesitantly asked the librarian if they have some Talmud books. “Our religious books are over there” she pointed towards the shelves. “We might be missing some Talmud books” she added, “I am afraid some of them were never returned”. I walked over to the area she pointed to, and there it was – the Rabbinical Literature: Mishnah, Midrash, Talmud and Aggadah books all lined up next to each other.
Our teacher mentioned the Steinsaltz Edition of the Talmud, which includes Hebrew translation. It was hard to miss the large Steinsaltz books on the library shelves. I picked up the one titled ‘Tractate Kiddushim ‘ (מסכת קידושין) and read the section our homework assignment referenced:

The section above is part of the Mishna – a collection of oral Jewish traditions that was assembled and edited circa 200–220 CE by Rabbi Yehudah haNasi. Next to it on Talmud page is a corresponding section of the Gemarah: a discussion by later scholars (known as Amoraim) that interpreted and expanded on the Mishnah section. The Gemarah was originally written in Aramaic language, and the Steinsaltz edition includes a Hebrew translation of it. The Talmud book also includes later interpretations written by luminaries such as RAbbi SHlomo Itzhaki (RASHI– רש"י). These sections are written in a special ‘Rashi script’.
Sounds complicated? Well, it is. The Mishnah is written in somewhat cryptic language. You have to know something about the laws written in the Torah in order to fully understand what the Mishnah is discussing. The Gemarah assumes knowledge of both the Mishnah and the Torah, and it contains discussions, opinions and stories that often represent conflicting scholar views.  And there is the Rashi interpretation, which requires that you first understand the problem in the Mishnah/Gemarah text he was trying to resolve - sort of an early form of the game Jeopardy.
So why am I writing all of this? I am perplexed that as a Jewish person, I managed to go through numerous classes, schools and universities, yet never had a chance to open a Talmud book before. I had my fair share of Bible studies atschool, and actually quite enjoyed it. But the Bible represents Jewish literature through 4th century BCE, or thereabouts. There are over 2000 years of Jewish literature written since the Bible; Mishnah, Talmud and their interpretations represent a big part of Jewish thinking throughout that time period.
There is a quote I like by the famous American author - Michael Crichton: “If you don't know history, then you don't know anything. You are a leaf that doesn't know it is part of a tree. ”
The early Zionists broke away from old Jewish traditions, and for a reason. They started a revolution and had to free themselves from the chains of passive Jewish attitude towards national salvation. But 65 years after the state of Israel was founded, we can and should reestablish our links to our heritage. Otherwise we will become scattered leaves without a tree.
No, it doesn't mean that we should all become Orthodox Jews. I certainly don’t plan to. It means we should strive to teach our kids about our rich Jewish heritage – and that includes opening a book of Talmud. At least once during their student lives.