Life, Liberty and the Pursuit of Middle-East Peace

I just finished taking a class called “Selected problems in Ethics”. It was my third class in philosophy, and I am finally starting to get the hang of it. Frankly, after spending most of my earlier life studying topics such as computer engineering, finance and marketing, my brain synapses evolved in a very specific way. I used to regard philosophy as a pointless rambling, but I am beginning to realize it actually tackles some of our most existential questions. I actually find it quite relevant to daily existence here in the Middle East. 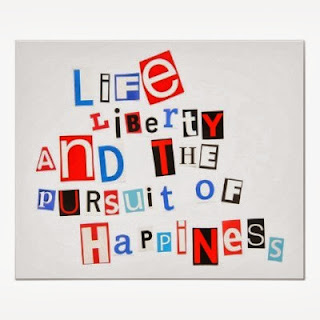 Over the years I was programmed to think in a very “results oriented” manner. First identify a clear target (e.g. product to build, problem to solve, goal to each), then devise a plan to get you there. When I first faced open ended philosophical questions I felt somewhat annoyed. Come on I thought, didn’t these people have better things to worry about? But questions such as “what is the definition of doing good”, “what constitutes a moral person” or “what are inalienable human rights” seem to be quite relevant today - as they were centuries ago.

As I opened myself (slowly) to ponder these questions, I realized the many things I took for granted. To no surprise, my personal value-system has been influenced by my upbringing and the society I was part of. Like everyone else, I was “indoctrinated” by parents, schools, friends, political leaders, authors, news editors, books, movies, and so on.

Growing up in Israel shaped the way I saw the world and what was “right” and what was “wrong”. But then I moved to California and lived there for 20yrs. Turns out California did have an impact on my way of thinking (duh!). But I only realized it after returning to Israel a couple of years ago. Like a space traveller, I found the place I left many years ago to be quite different - or was it me who changed?!

Israel views itself as part of Western civilization. It derives its notion of “justice” and “human rights”, from a long chain of western philosophers, such as Plato, Aristotle, and John Locke. Israel declaration of independence relies on prior manifests such as the United States Declaration of Independence and the United Nations Declaration of Human Rights. See for example the following excerpt:

“Israel will be open for Jewish immigration and for the ingathering of the exiles; it will foster the development of the country for the benefit of all its inhabitants; it will be based on freedom, justice and peace as envisaged by the prophets of Israel; it will ensure complete equality of social and political rights to all its inhabitants irrespective of religion, race or sex; it will guarantee freedom of religion, conscience, language, education and culture; it will safeguard the Holy Places of all religions; and it will be faithful to the principles of the Charter of the United Nations.”

Indeed the founders of Israel had a great vision. We should remind ourselves of it every once in a while. However day-to-day problems, particularly related to the Israeli-Arab conflict, tend to stand in the way of implementing that vision.

Israelis are pre-occupied with questions of “who’s right and who’s wrong” in our century old conflict with our Arab neighbors. Every day you hear about injustices, incitement, attacks, counter-attacks, oppression, terrorism, etc. etc. etc. The answer to the question on “who’s right and who’s wrong” often depends on whose “story” you believe; sort of a living version of the famous Rashomon movie.

Most Israelis believe that Israel is a western democracy, IDF is a highly moral army, and our government ultimately strives for a peaceful coexistence with our neighbors. We also believe that if it weren’t for the “Arabs desire to annihilate us” both nations could have resolved the conflict a long time ago.

I don’t know what most Arabs believe. I haven’t talked to them personally. I am just guessing they believe that Israel is an aggressive state, who uses force to expand beyond its international borders. That Israel relentlessly pursues its expansion agenda, with close support from the US and at the expense of Arabs - including those who are its own citizens.

So “who’s right and who’s wrong” in this conflict? Before we could answer that question, I believe there is a “meta-question” (philosophy lingo) we must address: “Do Israelis and Arabs have a common value-system”? Do we believe in the same set of human rights? Do we share the same principles of self-government? Do we both endorse the UN principles of peaceful conflict resolution? I don’t think we do. Perhaps here lies some of the greatest difficulties in resolving this conflict.

Presumably there are “peace negotiations” now days between Israelis and Palestinians. On one side of the table sits Israel, supported and pressured by Western nations. On the other side sit Palestinian Arabs and at the head of the table sits the US, chaperoning the two sides into an agreement. While Israel and the US may play by Western rules of “liberty and justice for all”, the Arab side might be playing by different rules altogether. After all, Arab cultural heritage and moral principles are different from those developed in Western civilization. I am not saying the two sets of principles are better or worse than each other - I am just saying they are different.

The result of these cultural, ethical and moral gaps is that the two sides are “talking past each other”. After all, they have been doing that for 100yrs or more. What leads us to believe this time will yield a common ground?

Perhaps the first step should involve a “philosophy workshop”. Get the two sides to agree on common principles for personal and national wellbeing. Have them jointly define what is “good” for a nation and “good” for its people. Once they establish a common philosophical framework, they would proceed to discuss the specific issues at hand. Who knows, perhaps a few philosophical “guiding principles” could go a long way…