To Bomb [Iran] or Not to Bomb: That is the Question

You can’t really watch TV, listen to the radio or read the newspaper in Israel now days without coming across the question: “should Israel bomb the nuclear facilities in Iran, or not?” It seems to be the ultimate “you’re damn if you do and you’re damn if you’re not” question. There are little, if any doubts that Iran is frantically racing towards the production of nuclear weapons.  The specter of a nuclear Iran keeps many in the Middle East, Europe and America awake at night. 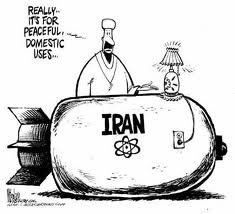 The diplomatic efforts to slow down or even stop Iran from pursuing its nuclear ambitions yielded disappointing results thus far. After all, why shouldn't the Iranian regime pursue a nuclear weapon? India has it, Pakistan has it, and even North Korea has it. Plus the lesson they learned from their former neighbor/enemy - Saddam Hussein - was that regimes which are unpopular with the international community might be toppled by force. You can’t really “blame” them for wanting to join the nuclear club. Alas, if only their motivations were “defense” oriented...
The Iranian regime aspirations go far beyond governing their own country. Their desire to spread their so called “Islamic revolution” led them to actively engage in conflicts in Lebanon, Iraq, Syria, Gaza, and more. Their interventions often involve subversive terror tactics – not what you expect from a sovereign state. One can only imagine the extent and nature of these interventions under a protective nuclear umbrella.
Most alarming to Israel are the public declarations made by the Iranian president, Mahmoud Ahmadinejad, of his intent and commitment to annihilate Israel. With a nuclear weapon under his command, he will be in a position to do so. One may think that no country is “insane enough” to launch a nuclear attack, since it will lead to its own destruction, or even trigger World War III. But we’re not talking about a “sane” regime. We’re talking about religious fanatics that believe they are on a “mission from god”. The world has seen fanatics before, but never with a nuclear bomb in their command.
Israel isn’t the only country in the region threatened by a nuclear Iran. The century-old animosity between Shiite and Sunni Muslims will definitely take a new turn. There is no love lost, to say it gently, between Iran who is Shiite and other Sunni states such as Saudi Arabia, the Arabic Gulf states, Egypt, Jordan, and soon to be Syria. To counter a potential Shiite dominance those Sunni states will be force to seek nuclear weapons of their own. Did somebody say Armageddon?
So what should the “world” do? The answer seems simple – stop Iran either through diplomacy or by force. But the world is a fractured entity now days. The USA is mired by economic problems, a presidential race, and is still licking its wounds from the wars in Iraq and Afghanistan. Europe is busy trying to save itself from the Euro collapse. Russia and China have mixed feelings about intervening with other semi-totalitarian regimes. Plus there is the question of oil supply and economic risks associated with any military action against Iran.
As time runs out on stopping Iran from achieving its nuclear objectives, Israel is left alone facing the decision whether to act now, or face the risk of a nuclear threat from Iran.
Bombing Iran is no simple task. There is the challenge of mounting an air offensive thousands of kilometers away, penetrating air defenses, and destroying nuclear facilities hidden in underground bunkers. If it sounds like “mission impossible” - it probably is. But let’s assume that the Israeli Defense Forces (IDF) can overcome those challenges. Then what?
Iran is not going to sit idle. They will likely launch a counter attack using surface-to-surface missiles. Those will be launched by Iran, or by its minions in the region:  Hezbollah, Hamas, and whatever’s left from Assad regime in Syria.  IDF specialists estimate the casualties from a counter-attack to be “under 500”. Sounds like a reasonable price to pay in order to prevent a nuclear catastrophe. Unless of course you or your family happen to be one of the “chosen” ones.
Plus there are the economic side effects: sharp increase in oil prices, decline in world stock markets, potential embargos against Israel, drop in foreign investments and tourism – in short a local and possibly global recession.
To bomb or not to bomb – that is the question. Or in the words of Shakespeare’s Hamlet:
“To be, or not to be: that is the question:
Whether 'tis nobler in the mind to suffer
The slings and arrows of outrageous fortune
Or to take arms against a sea of troubles
And by opposing end them?”
Hamlet ordeal didn’t end too well… I hope this one does.
Posted by bd249 at 11:26 PM