There are two types of forecasts we follow in Israel now days– one has to do with the weather and the other deals with possible missile attacks. Those who live in southern Israel, i.e. closer to the Gaza strip, experience this dual-forecast syndrome daily. But if you live in the Tel Aviv area, then chances of “missile showers” are still relatively low. 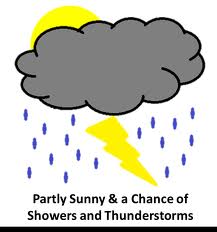 I believe the threats for missile attack on Tel Aviv come from the following sources:
Hamas in Gaza: the organization that rules the Gaza strip, with presence in the West Bank. Hamas is armed with short range rockets, but is also rumored to have longer range missiles that can reach Tel Aviv. Hamas has transformed from a “terror organization” to a ruling party and stands to lose a great deal if they start a “war” with Israel. I believe their main interest is to further solidify their position within a Palestinian government and expand from Gaza to the West Bank. My assumption is that Hamas will NOT launch a missile attack against central Israel unless they feel threatened by destruction. It is likely that Israel signaled the Hamas that as long as they “stay within boundaries”, it will not invade Gaza and topple them.
Islamic Jihad: a small, radical organization in Gaza whose claim to fame is that (unlike Hamas) they continue the armed struggle against Israel. Fortunately the Islamic Jihad is far less equipped compared to the Hamas. They may be able to launch short range rockets and engage in terror attacks across the border, but probably cannot directly threaten central Israel. The Islamic Jihad strategy is to irritate Israel enough to take a broad action against Gaza and by doing so pull Hamas into the fray. I hope that Israeli military and government leaders understand that dynamics and will avoid such escalation.
Hezbollah in Lebanon: they seem to have evolved from a terror/military organization into a powerful political party. Their main goal is to gain broader control over the Lebanese government. Hezbollah launched an attack on Israel in 2006, which led to what’s been known as “the 2nd Lebanon war”.  While there has been a debate who won that round – Israel or Hezbollah - there is no doubt that Hezbollah suffered major blows during that war. It is unlikely that Hezbollah will initiate any hostilities, unless greatly provoked by Israel. Hezbollah priority is to advance their position within Lebanese politics and a war with Israel will be counterproductive for them.
Syria: The Assad regime is fighting internal opposition and is busy with its own survival. The Syrian army is deployed against its own citizens and the last thing they need right now is clashes with Israel.
Iran: definitely a rising threat in the Middle East. Not just to Israel, but perhaps even more so to Sunni Arab countries such as Saudi Arabia, Egypt and others. Iran is most interested in lowering the pressure from the West, and continuing the work behind the scenes on its nuclear program. Any military activity from their side (e.g. launching missiles against Israel) is going to jeopardize their plans, and perhaps instigate a US/European attack against Iran. Iran prefers relative calm in the region for the next couple of years until they achieve their nuclear goals.
So what could possibly go wrong and cause a missile attack against central Israel?
·         Scenario One: escalation in Gaza. Israel “breaks the rules” with Hamas and launches a massive ground assault against Gaza. Given the priorities of Israel – keep the West focused on stopping Iran’s nuclear program – a ground assault against Gaza is not in Israel interest right now.
·         Scenario Two: Israeli strike in Iran. Israel decides to launch a preemptive strike against Iran nuclear program sites. Iran retaliates by launching long-range missiles against Tel Aviv. A worst case scenario may have other parties (e.g. Hamas, Hezbollah, Syria) join the action, which will lead to a “regional war”.
It is no secret that the US is putting significant pressure on Israel NOT to launch a strike against Iran before the diplomatic efforts and economic sanctions are exhausted. The US president certainly doesn’t want to deal with a Middle East crisis before the elections in November 2012. Israel would rather have US support for an attack against Iran plus there is very little public support within Israel for a “solo” attack against Iran.
My personal forecast is that we’ll have a partly sunny April, with low chances of missile shower. Optimistic, maybe a bit naïve, but what is the alternative?
Posted by bd249 at 10:30 PM