Raising The Flag – A Simple Act Of Pride 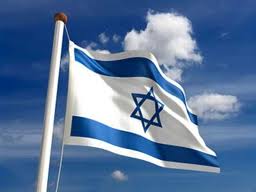 We put a bumper sticker once on our car. It read “I  ISRAEL”. The car was parked on our driveway and the sticker must have caught someone’s attention.  A few days later a couple of rocks were thrown at our son’s bedroom window. Fortunately he wasn’t there at a time. A coincidence, or a ‘hate crime’? At any event this was the last time we publically displayed anything associated with Israel.
We never raised the American flag either. Don’t get me wrong; I have a lot of respect for “old glory” (as the American flag is known), and I admire the republic for which it stands. But I grew up raising, saluting and doing service for the Israeli flag.
Sure, we attended the Israeli events in Silicon Valley – e.g. Memorial Day, and Israel independence celebration. But these were secluded events, attended by the small Israeli community and surrounded by heavy police security. They made me feel isolated rather than part of a public celebration.
Last week we celebrated Israel Memorial Day followed by Independence Day. It was the first time in 20yrs we celebrated those in Israel. We attended a memorial service in an Air Force base; hosted friends and family to honor the fallen; visited the main celebration stage in Tel Aviv, and participated in “traditional” BBQ parties. For a couple of days the TV programming was all about the personal sacrifices and the triumph of the dream called the ‘State of Israel’.
There were thousands of Israeli flags everywhere – on houses, street posts and rushing by cars. We raised the Israeli flag on our house too. It felt different. It felt at home.
Posted by bd249 at 10:19 AM